Miss Tattman's Year in Review Pt II- in which we meet the gentlemen.... 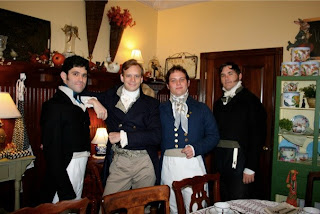 From left to right; Mr. Cushing (the Dreadful Cousin, hereafter referred to as the D.C.), Mr. Tumbusch, Mr. Ramsey, and the Doctor
Portrait by Toni Tumbusch.

My Aunt and Uncle Downward and I have arrived safely in New York, where my uncle informs us we shall spend nearly a month before returning (all without the D.C., thank goodness, but more on that later). I was sorry to spend so little time in your part of the country, but it was most cheerfully spent for all that! 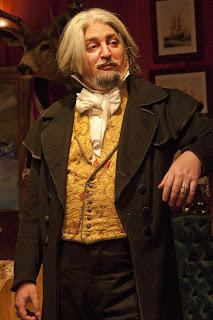 I was so pleased to finally observe all those dear folk whom you had written to me about in their natural habitat, as it were. Mr. and Mrs. Hedgewood are just as you have made them out, and it is clear that Mr. H. especially regards you as his own dear child. As for Mister Ramsey, he is as dear and kind as I fully expected, and you were right about his delightful wit! 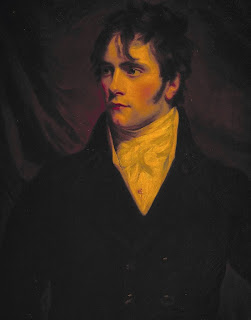 My cousin is everything and nothing I expected. I was surprised to find you so well acquainted. I must say, it is rather a hard thing to find one’s ally and one’s intended foe at parley before one arrives on the field! He was exceedingly attentive to me during my entire stay- despite my repeated assurances that such devotion to familial duty was not necessary. He met me promptly upon my arrival, and insisted upon repairing to lodgings he had reserved that I might rest, then poured more tea into my poor stomach than I believe I had room for. I am surprised it was not running out my ears. The entire journey to Nashville I swear his gaze scarcely left me - a most vigilant jailor, I must say!

At the ball I actually had to remind the man that proper manners dictate I dance with more than just the one partner. Luckily Mister Ramsey was there to rescue me for a dance, and we enjoyed ourselves immensely. I suppose one might find the D.C.s attention charming, had it not been predetermined that the man is Dreadful. However under the circumstances I must say it vexed me very much! 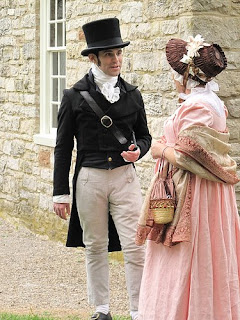 For all that I will admit the man has a keen and sensitive mind, which did provide some relief and give us things to talk of. He is a great reader, and supplied me with many books. A most peculiar man, all in all.

There was one last person whom I was most pleased to finally make an acquaintance with. Your Doctor has finally materialized off the pages of your letters and proven himself to be just as handsome and  and dignified in reality as you made him out to be. I must say, my dear, that he pleased me very much. He was a fine dancer, and a most enjoyable conversation partner. In particular, he seemed keen to hear stories of our lives growing up, and was, I believe, most happy for all intelligence I could be prevailed upon to provide about my dear Emily. 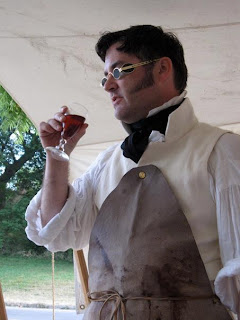 The Doctor enjoys a civilized respite after his labors.
Portrait by Toni Tumbusch

My cousin informs me that the Doctor is well liked among all those whom he serves with and attends upon, though of late the he has been of a strange and taciturn mood......... yet he did not seem so afflicted when we were all met together. I have taken a keen interest in him, and shall be most  interested to see how the matter sits when I return from New York next month........

Until then I remain,

N.B. My Aunt and Uncle send their love, as does Mrs. Collier via post.