Nice Day in the Kitchen- Apple Pie and Macaroni(and cheese)

I got to go cook for a field trip at Locust Grove last week. I haven't gotten to do this in awhile, and it was a lot of fun. It was actually a homeschool group, and they nicely divided the kids up into three groups by age. It was especially nice to get to talk to three different age levels in one day, but not all at once. The smallest ones are usually at the level of 'yes, you can make food with fire, wow!', the second group was about the right age to learn what we mean by primary sources, and the older ones, who were about 11-13, were able to understand a bit better when I talked about how this work was done by slaves at the Croghan farm. 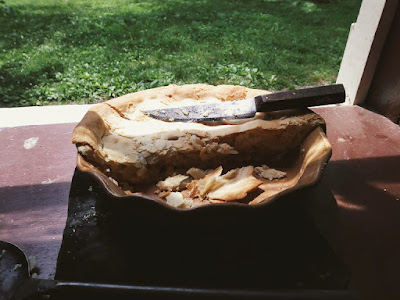 It's times like this I really wish Locust Grove had a bake oven, since this wasn't the easiest thing to handle in a dutch oven. Getting it out without burning your fingers isn't the best thing ever, and I managed to mess up the crust a little between that and rising it up to add the rose water. But, no matter, it was very well received! I absolutely love rose water as a flavoring, and this reminded me why.

Macaroni - The Virginia Housewife, 1824
Boil as much macaroni as will fill your dish, in milk and water, till quite tender; drain it on a sieve,  sprinkle a little salt over it, put a layer in your dish, then cheese and butter ....put the dish in a quick over, twenty or thirty minutes will bake it.

This has become another of my go-tos. It's easy, it's vegetarian, it is absolutely delicious, AND it really gets peoples attention. I actually brought this one in to one of my classes where I teach last semester and the students really enjoyed it. 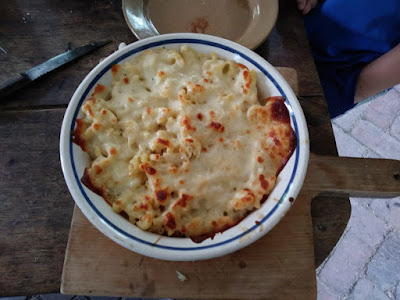 I was quite pleased with how it came out this time- when it looked almost ready I put a few more coals on top of the dutch oven and just left it 3-4 minutes longer to get some nice browning on the top. I was very careful not to wait too long so it wouldn't get burnt, and it came out just right. It was a big hit with the other volunteers and my kitchen helpers. 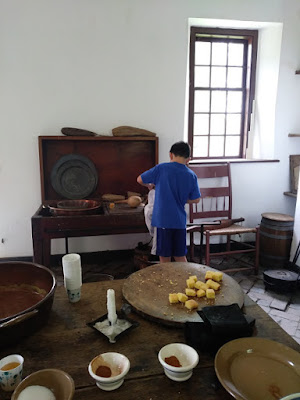 This was election day in Kentucky, which meant that the public schools were closed to serve as polling places (for a state with notoriously low voter turnout, we actually do a decent job of marking the day). There were two neighborhood children playing on the grounds who were just awesome. They kept coming into the kitchen to see what was going on, and eventually became my helpers. Normally I don't feed the public at these things, but one of them has a dad on the board, so I said they could have pie if they got permission.

It was delightful seeing them pop back up all sweaty and breathy, because they had obviously run home and then run all the way back after having asked mom (the one boy lives next to the Grove, so they weren't dodging traffic or anything). It was just really nice to see kids outside, playing, having adventures. And they even walked away with a taste for rosewater in pie :-)
Posted by Amy Liebert at 5:10 PM 9 comments: