So it's been almost a year since I finished this dress, and I finally found some time to blog about it! Better late than never, right? Because I am actually super proud of it. I think I will actually do another post later with some further construction for details.

For this post, I am using this dress as a case study in connections between British and American fashion in the year 1815. This post will focus on three particular examples - two American, one British- all dated the same year which exhibit very similar characteristics. 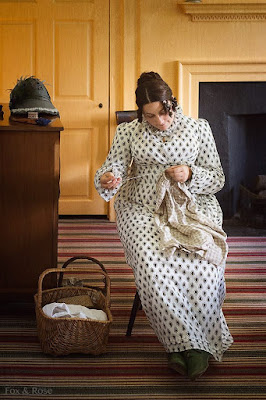 Of course, it should always be kept in mind that a museum date is a secondary source, which is why it is important to consult a variety of sources and look for consensus. Looking at these three dresses, which have all been given the 1815 date, shows some very similar elements which, put together, create an image of fashionable trends on both sides of the Atlantic- along with some of the individual choices of their wearers.


Mine was mostly was a recreation of the dress on pages 99-100 of Costume in Detail (CID). 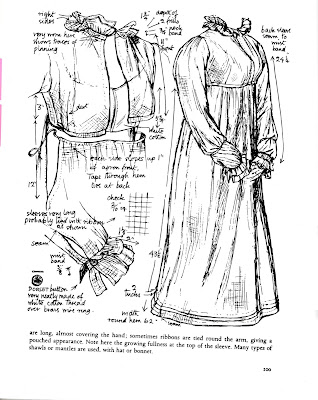 CID is a fantastic book if you don't have it, but it does leave some details out. Since it was written in the 1970's, it occurred to me that many of the pieces might have been digitized by now.  Some googling got me exactly what I wanted. The dress is part of the Snowshill Collection in the care of the National Trust in the U.K. 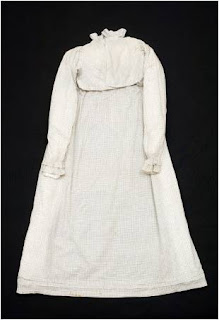 I was also able to get a lot of insight from this dress in the Genesee Country Village collection, as photographed and sketched by the amazing Betsy Bashore. This one has also been dated to 1815. 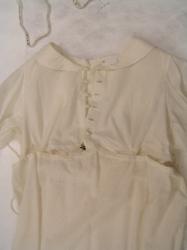 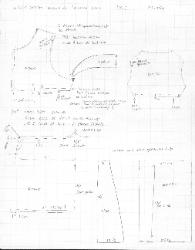 Photos and sketches are copyright and courtesy Betsy Bashore.
If you have not yet checked out the amazing resources Betsy has made available, do it NOW.

It is striking how similar the style is to the British example. Each has the apron skirt separate from the bodice, with the high neck and front closures. Both also have long sleeves. 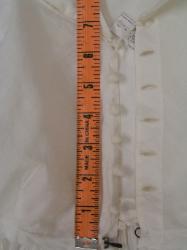 There are differences- the American dress has buttons while the British does not. Both the CID and National Trust descriptions note that the British dress  'shows signs of pinning', so that was probably how it was closed. The American dress also does not have the overlapping under bodice, possibly because the buttons made it less necessary. The American dress has the collar laying flat while the British has the small standing collar with the double self frill. However both are clearly variations on the same theme. (After working with the version which requires pinning, I can say that my next attempt at this style will definitely be using buttons. I can imagine it would be less time consuming and make it easier to create a smooth line).

While the British example had the skirt in two pieces with a 'slight flair' cut into each, the American example incorporates a separate side piece cut at an angle. Both methods lean towards the 'A-line' coming into fashion in the teens. My suspicion is that the amount of fabric available dictated whether or not a separate side panel could be incorporated.

This third example in the Met from America in the same year also shows many of the same basic elements of the British and Genesee examples. 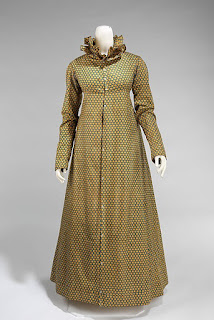 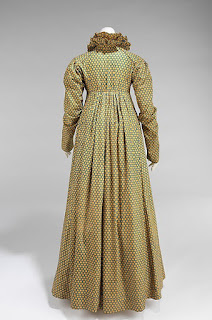 It has the same high neckline as the other two, and the same double self frill on the collar as the British dress. It also has long sleeves just like the British and earlier American example. Here the skirt is not separate from the bodice as with the other two.

It should be noted that I have seen some very learned folks describe this garment as a 'pelisse'. This might be chalked up to the blurred lines in this period between different garment types. In any case, the basic elements of the garment still show striking similarities to the other two.

There is a great deal of scholarly research to back up these connections across the Atlantic. In her amazing book The Needles Eye: Women and Work in the Age of Revolution, Marla R. Miller writes about the role fashion as a culture transmitter both between continents and within the continental United States. Fashion would enter the United States along with other goods through major shipping points- Philadelphia, Boston, New York- and travel inland from there. In addition to fashion plates, women would demand that their friends and relatives visiting major port cities bring back descriptions- or examples of- the latest trends.

The following advertisement was run before the war was even over:


"New Store. VAN BUSKIRK & POWERS Have just received from PHILADELPHIA, and are now opening in the STORE ROOM formerly occupied by C. Van Buskirk, and opposite the LOUISVILLE HOTEL, or Sign of the Golden Eagle, a large and General assortment of BRITISH AND DOMESTIC GOODS, together with a large assortment of GROCERIES all of which they are disposed to sell on moderate terms, for Cash, or such country produce as may suit.- Louisville, November 8th 1814"
(Transcribed from the Filson Historical Society)


While I have tried to focus on these three particular garments to narrow the focus of this entry, there are more surviving garments and sketches from the period illlustrating this style. Interestingly, I have not seen this exact style featured in any fashion plates from 1815.  I have, however, been able to find examples in sketches and genre art.

This sketch from 1816 in the Met shows a similar high neckline, likely with the same apron skirt (not to mention a *fabulous* ruff). 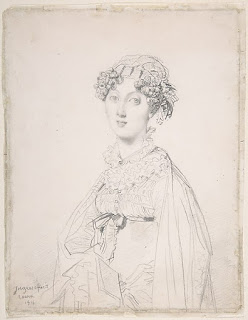 The Met is listing this as 'French' because of the artist, but, admittedly without further research, she sure sounds British to me.

We an also find an example of this style as early as 1813 in American genre art. Here is John Lewis Krimmel's Merrymaking at a Wayside Inn. If you look at the young lady gettin' friendly with her fella in the bacground stage right, I *believe* we are seeing a similar gown.

Attributed to John Lewis Krimmel "Merrymaking at a Wayside Inn" (probably) 1813
Metropolitan Museum of Art Accession Number 42.95.12
Following the link to the Met will allow you to zoom on a high res image

There is a white part on her neck and shoulders, but I think that is meant to capture light because you can clearly see the same high collar and double self frill from the British example in CID and the dress (or pelisse) in the Met. This also shows a very similar check to the British example at the beginning of this post.

Comparing these three dresses shows many similarities in fashion in Britain in American in 1815; the high neck, the apron skirt, the self frill. The variations are also important- each individual dress shows variations on these basic lines. The women who wore them in 1815 (and presumably for some years after) made individual choices based on a basic idea. Comparing these dresses shows connections between their wearers, but also their individuality.