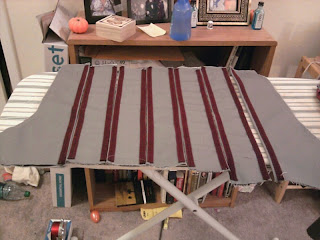 Panes with pretty trim- machine began to get cranky very quickly into this process. Tension quickly went to hell (in brand new and exciting ways, just to keep me on my toes!) and these had to be picked off and re-sewn more times than I care to recall. 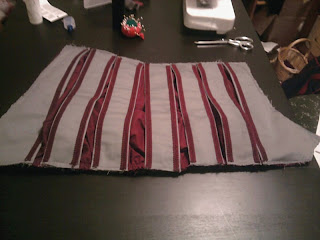 Everything for one leg all sewn together. The pattern had some instructions about leaving a hole open to add the stuffing later, but I swear this *completely* contradicted some of the other instructions, so I just did it here. We used nylon tool, the only synthetic thing in here. I think it should breath ok, and be nice and light.
At this point in the process I gave up on my machine all together and went running to Sharon to use her Husqvarna Viking. OMG, yo lo quiero. That thing zipped through all these layers like freakin' butter. WANT. 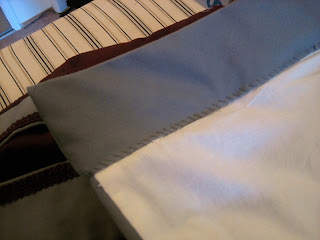 That's right, because work begets more work, hand stitched inner waistband, ya'll. I was going to just throw on another machine seam which would have shown through, but having put that much work into it so far I was suddenly determined to do even more to make it look awesome.
At this point everything is awesome, except the legs. They are 6 inches too big for the bands (and I do *not* want to just have big gaping leg bands. I've seen it, I've mocked it, I'm not doing it). The pattern makes it look like I can just gather/ease them into the legbands- Ha! nonsense. This is partly my own fault because I was silly and in a rush and didn't cut the interlining down and away from the seams so now the whole thing is super bulky. I think I am just going to have to detach them from the overlay and base and do some pleating and overlapping. This seemed like a giant catastrophe about the time I made myself walk away last night, but in the light of day it seems fairly logical and ok.


1) Interlining them was in fact probably totally unnecessary. For starters, I foolishly did not cut the interlining down so it wouldn't get in the seams- it was even in the directions, I just kept powering through and ended up causing my self a whole lot more work. This made it impossible to gather them into the legbands, which I think was the idea. However I"m telling myself that wouldn't have looked any better than what I'm ending up doing. Also pouring through pictures of other people's pants last night, none of them seem to be interlined, and they work fine.

2)Also staring at other people's pants, I realize that a lot of the really nice ones have the actual leg band tucked up nicely in the slops, ie it's hidden by the panes and some reasonable poofyness. I think this is just achieved by making the panes themselves and possibly the overlay longer than the actual base of the slops. Making the overlay longer, rather than just wider as it was in this pattern, would involve gathering it along the inseams, not sure if that would cause too much extra bulk or not. Probably would be ok with the thin cotton I used.

Pattern Review- Margo Anderson's Elizabethan Gentleman's Wardrobe
There were certainly a few things I ended up changing  or would change if I did it in the future, such as making the panes longer. Also I ended up changing the curves on the crotch seam after staring at some other pants I had made and realizing there was a reason these weren't working out. Then again, maybe there's something I don't know here, I don't pretend to be an expert.
All in all however, this got me through my first set of paned slopes (and first men's garment for that matter) pretty well. If I make another pair I will probably use the same pattern to start with, just implementing everything I've learned through this experience. I'm definitely going to keep chugging along with it for the doublet.
Posted by Amy Liebert at 4:17 PM No comments:

So about a year ago we said 'hey, Andrew sure needs an actual suit of livery, ie paned slops and a doublet." Frankly, knowing us, I'd say the fact that that is finally happening now isn't too shabby... :-p

As of yesterday, progress was about here 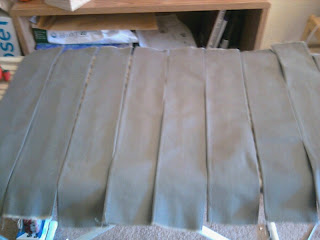 Some awesome panes as measured and cut by Andrew, including interlining , sewn by yours truly 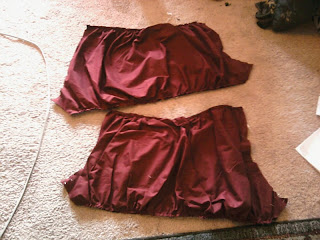 Slops innards as cut by Andrew and sewn by moi
There's also some lining around here somewhere Andrew put together.
Just got back from JoAnn's with tons and tons o' trim and some lining and mock-up fabric for the doublet.
Wish us luck.
Posted by Amy Liebert at 5:59 PM No comments:

Countdown to Valhalla- 10 Days to go

Ten days folks, in which I need to achieve the following;
Finish Andrew's slops
Make Andrew's doublet
Finish all minor repairs to my dress which I always forget about- mostly done
New bloomers, cause I like to spoil myself like that
New clasp on extra cape Maggie left for changeable Valhalla weather
I would also really like to accomplish
new caul (read, first of any, dont' let the *new* fool you into thinking I'm replacing some preexisting garment)
Print out poems, songs, etc on reasonably period looking paper
Possibly research some home remedies and buy a reasonably period looking journal- I have this scheme where my character, being relatively newly married, could go around collecting remedies from the other married ladies.

Oh, also I think I made some insane promises to myself about cleaning and organizing the apartment and exercising and things.... so, um, yeah... there's that .....

Since Born This Way just came out I'd say the soundtrack for the next ten days is already picked out.

Next steps, Go to the Motherf*cking bank like an adult*, then JoAnn's for trim and other livery supplies.

*Because this is my manifesto
Posted by Amy Liebert at 3:26 PM No comments:

well, the short version at least... for now

Three more days... three days in which to take a final, turn in one paper and write and edit 11 pages on another- Grad Student, activate!
Posted by Amy Liebert at 3:26 AM No comments: