Because we all start somewhere...

I give you the very first thing I ever made for my very first year of Dickens... 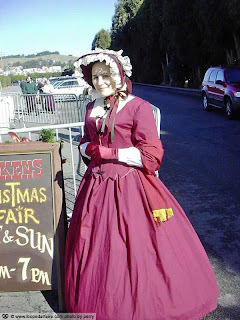 There you have it, folks- a 'Victorian' dress.. out of cotton broadcloth (in maroon of course- what else!) from a Butterick pattern which has been thankfully discontinued and was long ago ruled unacceptable by the Costume Dept. Hastily assembled in the week before open with the help of Sharon Collier- the first of many, many projects I have laid out on her table- and the patient encouragement of Alexandria Volk. When I told Alexandria this was my first sewing project I still recall her chuckling and saying 'well, you've certainly chosen baptism by fire". I had a bunch of fun in that dress...may it never see the light of day again....

Also featuring the old bonnet of doom....as much lace and holly as I could possibly hot glue on in the time allowed!

Posted by Amy Liebert at 5:50 PM No comments:

(Warning, detailed. This will probably only be interesting if you are actually considering pursuing this particular hobby. You have been warned. )

Many people have tried to convince me to improve my writing skills over the years... Maggie is the first one who actually found the right bate to make me do it. Plus she sent me a starter kit- a dip pen with tip, AND a how to guide. The book is a reproduction of an  18th century manual, and contains all kinds of delightful period aphorisms and the like to practice writing, in addition to the basic letters and other things. Since I didn't exactly happen to have any lose India ink lying around, I first started out tracing the book itself lightly with the pen, then copying onto paper with a ballpoint just for practice. One particularly amusing part to me was a 'List of Christian Names" from A-Z, starting with 'Arabella'. I had a particular bit of fun perfecting that signature :-D (and if you don't know why feel free to ask Therese and I...then get comfy while we prattle away....there's even a song!).

In order to get some more supplies, I went to Michael's where I was able to get some ink and pen cleaning solution to get started. They actually do have a basic selection of stuff for this, so apparently we are not the only folks out there indulging in this delightful epistolary nonsense. Then followed my earlier posted scribbles, after which I penned out a draft of a letter for Miss Waterman. I wrote the last paragraph three times, and by the third time I had it almost half as small as the first. I also spent a bit of time practicing my Elizabeth Tattman signture so it would look natural. I'm pretty satisfied with it so far. There is definitely a muscle memory to it that will just take practice- including making sure you in no way accidentally flick or shake the pen, which results in a lovely rorschash  test where your letter used to be (side note: Clean & Clear makeup remover wipes are great for getting ink off your hands. Not sure what this means I've been putting on my face, don't really care).  I found myself cleaning the pen every so often as I went along- no idea of this is correct, or if I am just not doing something right to feel as though I need to.

In any event when I came back the next day, I found the pen had become bent around the slit down the front, so the two bits at the end were out of whack and the ink couldn't work its way down to the tip correctly. Tiny issues, but completely keeps it from working apparently. I was afraid it was broken but finally managed to bend it back so that it worked *mostly* as well, but it still seems scratchier. Not sure exactly what happened, but the good money is probably on my having pressed too hard while writing, jaw grinder that I am. Went back to Micahel's to look for another tip, and I was unimpressed with the selection. The only way to get the piece I needed there was to purchase a whole kit complete with pen and multiple other tips- the cheapest was $10, for a bunch of stuff I didn't need save for one teeny tiny pen nib. The company does have them for sale in one or two packs off their website. The two packs are $2.74- except the shipping is $8.95. At that point I might as well get the instant gratification of taking what I want home from the store.

I also need to get some better paper. I have been practicing on an old sketchpad as well as that printer paper we use so much of at faire that's supposed to look all old timey and parchment-y (but looks like crap on toast next to the awesomeness that arrives in my mail from TN). Neither one held up so well as I would like against the pen tip, but then again, this could be an issue with my pressing too hard. I will have to work on it. Checked while I was at Michael's, but they didn't have any nice stationary stuff. So yeah, they will get you started, but don't count on them for everything. I forgot to check when I went back today if they have any basic seals and wax. I might be able to find the paper I want at Office Depot- I used to get nice stuff like that there for work. Who knows, maybe they will have a calligraphy section- seems like they sell everything else. Otherwise I will have to go find an actual nice stationary store. I think there is one in the Hillsdale Mall, or at least there was at one point.

However in the meantime Miss Waterman is just going to have to get a letter with a scratchy pen on fake parchment printer paper, 'cause that's what I've got and I wanna get this thing out the door. At least the penmanship will be significantly improved :-)