Cooking Over the Coals

So, branching out into some other areas of the early 19th century, I've been taking my turn doing some cooking over the hearth kitchen at Locust Grove. This is something I've been really wanting to do for a long time, and I've been very excited to finally jump in! It is definitely a 'learn by doing' process. 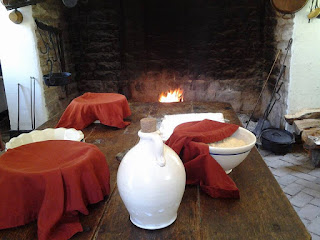 
My first foray I had Brian to guide me. He is definitely the baker in the house, and his bread is divine. Baking it in a dutch oven over the coals is actually pretty easy- and that's coming from someone who has hitherto stayed clear of baking! 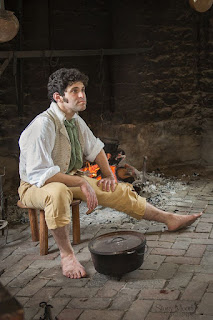 Brian at the Hearth
Photo by Fox & Rose Photography

For Antiques Market yesterday, I decided it was time to take it a bit further and try out a few recipes beyond bread. (And if you have never been to a Locust Grove Antiques Market, you must check it out! It's like a museum you can touch!)

In addition to bread, I tried out the following recipes from the Croghan era:

Pound Cake
One pound sugar, one pound butter, one pound or ten eggs, rose water one gill, spices to your taste; watch it well, it will bake in a slow oven in 15 minutes
-Amelia Simmons
American Cookery

I actually only had about half the required amount of rose water (1 gill = 4 ounces). I also added cinnamon for the spices. It's present in several of the other recipes in Amelia Simmons' book, and its still a modern favorite in baked goods.

I took 'slow oven' to mean that I shouldn't use nearly as many coals, however after 15 minutes it was definitely not done. I added more coals on top, but that seemed to brown the top without cooking the inside. Eventually I remade a nicer bed of coals to move it onto, then put a moderate amount on top. In future, I think the key for something like this will be a really nice bed of coals underneath to provide heat, without heaping too many on top so it doesn't brown too much.

In any case, this one was a big hit! The rosewater is divine, even with a half portion. I think it's a really good example of how smell influences taste. It just wafts up to your nose as the cake approaches your mouth which provides the taste. (I tried some of it on my finger to taste directly, and it is NOT good). 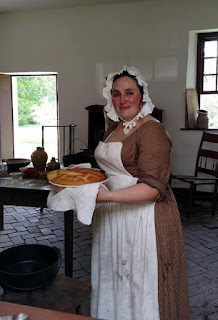 What's that? Am I hot? Oh no, WHY WOULD YOU THINK THAT?!
Photo by Hannah Zimmerman

To Make a Barley Soup
Take a gallon of water, half a pound of barley, a blade or two of mace, a large crust of bread, and a lemon peel. Let it boil till it comes to two quarts, then add half a pint of white wine and sweeten to your palate.
-Hannah Glass
The Art of Cookery Made Plain and Easy
1805 Edition

This one was a little more complicated- which is to say people did not much care for it. The interesting part is why- did I screw up, or have our palates changed so much? The directions clearly state to first reduce the soup, then add the white wine. Everyone who tasted it was, to say the least, taken aback by the forcefulness of the white wine taste.

On the other hand, my lemon went walkabout and did not get put in, and the only spices I had to add was the mace, so perhaps those other flavors could have balanced it out more. Perhaps I'll try again- when the weather gets cooler.