Of course, one of the best parts of the Jane Austen Festival is the shopping! 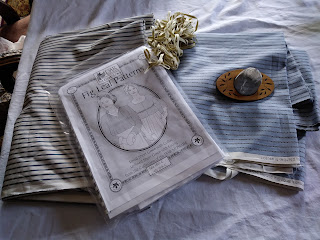 Honestly, I think I did a pretty good job of holding back this year, all things considered. But one thing I was really after was some fabric for a new spencer. Since so much of my living history time is spent in very warm conditions, I really wanted some light cotton. The only other one I have is cotton velvet, and I just didn't have the heart to even try putting it on this summer.

I think it shows how the further I go the less I feel like I have to prove. My first Jane Austen was like 'I WILL WEAR THIS THING ALL DAY TO SHOW OF WHAT I AM MADE'. This year I kind of looked at it in the closet for a second in the morning and thought 'wow, that looks unpleasant, I'm not gonna do that'.


My main inspiration piece was this one from Gennessee Country Village, graphed out on 19thus.org 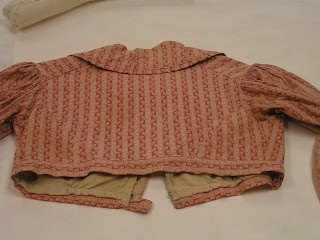 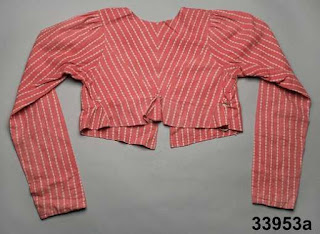 For the body pieces on this I used a pattern that was draped on me at a Burnley & Trowbridge  pelisse workshop in 2015. The sleeves I had drafted for another project last summer, and the collar I pulled from the Period Impressions spencer pattern.

My main goal with this project, other than making something that won't kill me in the heat, was to not obsess over details and crank something out. I've gotten VERY into period hand- construction details the last couple years, and in general I am prone to obsess over every little detail as I go. For the most part I really enjoy that, but it's also starting to feel like everything I do takes forever. So for the most part I tried to forgo all the period topstitching techniques  and actually let myself crank this one out.

There were a couple of exceptions to this. I pinned the bust darts in place and topstitched them down by hand.

This is a wonderful fitting technique I learned at the same B & T workshop which saves SO MUCH TIME I used to spend stitching a dart on the inside, trying it on to fit, restitching, etc. To help with the fitting I actually sewed hook and eye tape down the front before I fit the darts. 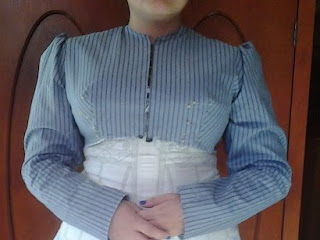 This way I had the front fastened exactly as it will be when I fit the darts, instead of trying to approximate that fit with pins.

From there I added a waistband which I sewed on by machine and finished by hand. 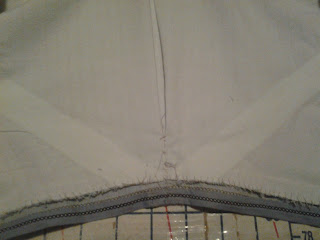 Unfortunately when all was said and done, it was fitting kind of loosely on the bottom. I had hoped that the waistband would take care of this but it didn't, so, with Brian's help, I added a pleat in the back. 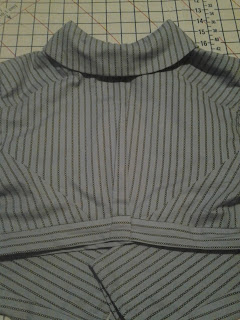 The finished result is cool and comfortable, I am very happy to say. 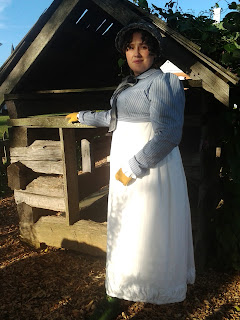 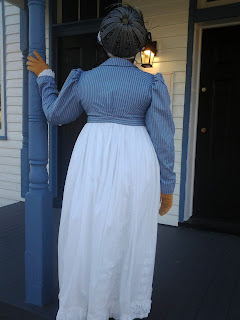 I think this was my favorite year for the Jane Austen Festival yet. For once, the July weather in Kentucky was (relatively) obliging, at least enough so to allow a certain degree of comfort and gentility. I was quite pleased with how our set-up came together. What I'm calling 'The Parlour' is shaping up as a comfortable and social atmosphere, the 'Meryton' to Lady Caroline's 'Rosings'. We've created a really love place that is focused on interaction with the visitors while providing respite and relaxation for the event participants and organizers.

There was some lovely cards and conversation 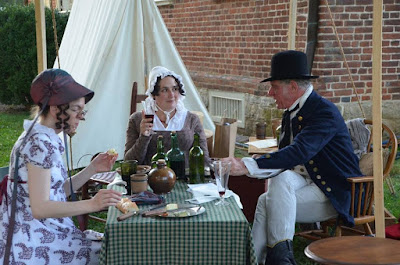 As well as some genuinely delightful visitors. 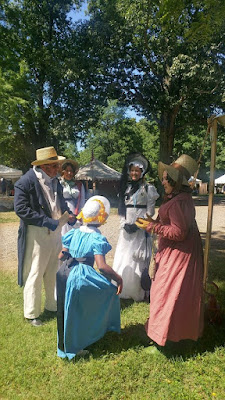 This little lady had the most delightful manners, she obviously took after her lovely and refined parents.
Photo courtesy of Historic Locust Grove

Several of whom we introduced to the game of whist. I have come to really love period card games, they are such a wonderful way to give someone a really hands on, interactive experience - and the folks who come to Jane Austen are always ready with the kind of wit and conversation that these games are really made to facilitate! 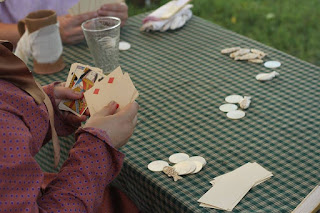 
And then there was the duel, where so many of the living history performance techniques I have talked about on this blog came very nicely into play.

For this year's scenario we took an episode out of Locust Grove's history which blended well into Jane Austen.

In 1822 Ann Croghan, daughter of William and Lucy Croghan, the owners of Locust Grove, was married to Thomas Sidney Jesup, the Quartermaster General of the United States Army. This was an advantageous match for her, to say the least. While Ann had grown up in one of the wealthiest houses in Kentucky, she would now move to Washington City and move among the leaders of the nation. However all was not smooth on the way to the alter.

On August 6th, 1821, her brother in law George Hancock wrote to Jesup

"...You must have been impressed with the belief that Miss A [Ann Croghan] was engaged to D. [Davis] and as you have asked me as a man of Honor to state whether this is true, I will as such state what I know to be true. First I most positively say that she never was engaged to him, & that she never intended marrying him......" 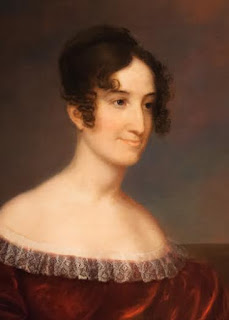 Mrs. Jesup after her marriage
Original portrait is on display at Locust grove, photo by Fox & Rose Photography


"....I this morning received your letter of the 20th inst. your having heard that Miss C  was to be married to Mr. B is another instance of the disposition of mankind to circulate reports, that have not the smallest grain for their origin--previous to my leaving Louisville I had a conversation with miss C. & the subject of my letter was to known to her’ and had she been engaged she would not have subjected me to the unpleasant result of such a fact...." 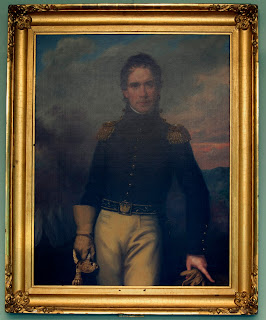 
Marrying Jessup was more than a romantic match for Ann, it set her up for a life of comfort and status, all of which this gossip was endangering. And as a woman, she was in a difficult position. A male relative had to intervene to help smooth over the situation with her intended. As it was, Jesup believed her brother in law, and the other suitors withdrew, but what if things hadn't worked out so smoothly? Our scenario then was that Brian, who loves to be the villain, had endangered Brandon's sister's intended marriage by spreading rumors that he himself was engaged to said sister.

We also tried to change things up a little to incorporate some of the research we had done into dueling recently. For starters, we let the seconds handle most of the negotiations. They also marked out the agreed upon space between duelists- going back to back may look great in the movies, but it was not dueling procedure in the 19th century. 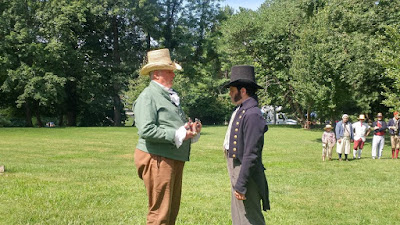 
The thing about street theater is, it has to read from far away. If you think like a film actor and get up in each other's faces, it just gets lost more than a few feet away, and you won't attract any attention. You also want to work very hard to bring the crowd to where you want them. In this case, our players began with a 'preshow' scene at the top of the circle drive in front of the house. The duelists met with their seconds, aired their grievances to the crowd, then parted, each going the opposite way around the circle drive. As they went, they continued to air their grievances to anyone they could find, drawing the crowd with them as they reached the dueling ground, where grievances were once again aired for the assembled crowd.

At the same time, several of our usual Locust Grove players moved through the festival, drawing focus to the duel and moving the crowd towards the appointed place 'Oh my goodness, have you heard, the gentlemen are going to duel! OVER THERE!!'

I enjoyed going up to several of the gentlemen and saying "Sir, you look as though you are a man of the world, will you please attend this dreadful event and be sure that all is carried out above board and honorably according to the Code Duelo?' 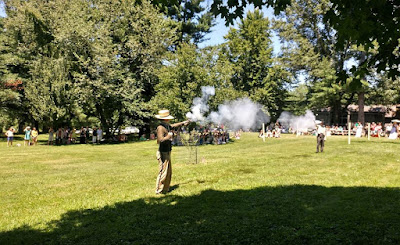 And of course, duels are practically made for cheating out to an audience!
Photo courtesy of Historic Locust Grove


On Sunday, the duel directly followed Brian's Dressing Mr. Darcy talk. This presented an intriguing challenge/opportunity- how to move him from the main tent to the dueling ground, keeping his audience with us as we went, rather than creating chaos and losing them.

Brandon and his second approached from the entrance to the tent. Brandon stayed back several feet, doing a lovely job of projecting physically to gain focus. Dave, his second, stayed at the edge of the tent, challenging Brian and his second who stayed on the stage. This way the dialogue literally happened over the heads of the assembled audience in the tent, so that they could see and hear it all clearly.

I was beyond proud and pleased when several of our other seasoned interpreters instinctively appeared to help move the crowd from there. We had two of us each on either side of the exit then motioning and moving the crowd the way we wanted them to go. 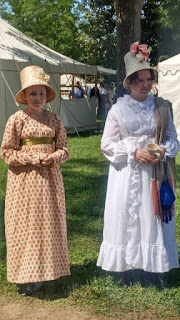 What you can't tell is that they are perfectly station to guide folks coming out of the presentation tent the way we wanted them to go. I didn't even ask them, they've just developed the sense and appeared where they were needed. *sniff* IT'S SO BEAUTIFUL!

We also didn't have one of the duelists die on Saturday. Instead, one of our principles took a hit, and honor was satisfied, resolving the matter. Duels make for naturally great theater, but one of the sticky bits is what to do with an actor who has 'died' in front of a large audience who, generally, refuse to leave until he gets up. But the reality is that duels did not always end in death- in fact, many never occurred at all, if the seconds were skilled enough negotiators to bring the matter to a close without violence. 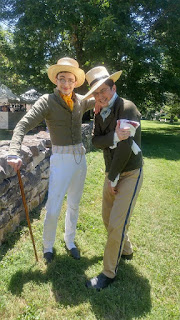 I am a little troubled by how unconcerned his second is....
Photo courtesy of Historic Locust Grove

However Brian just loves to take a hit, so, on Sunday, down he went. Luckily the solution presented itself in the form of several willing and burly sailors from the Acasta who hauled him off. 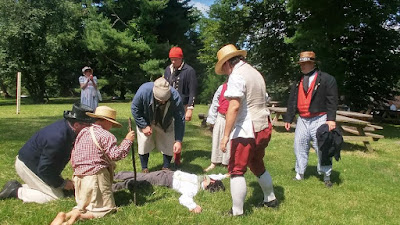 Not before picking him clean, of course!
Photos courtesy of Historic Locust Grove 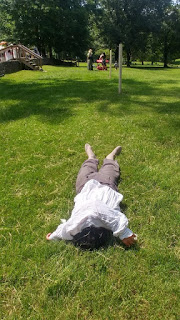 Btw, there is another interesting etiquette tidbit from the Ann Croghan saga which Austen fans will appreciate- in his first letter, Hancock assured Jesup of the reason he and Ann had yet not been officially engaged