This recipe came from a book called Advice to a Young Lady in the Colonies; being a letter sent from Mrs. E. of England to Maria Macarthur in the Colony of N.S. Wales in 1812.

Apparently "Mrs. E" was some kind of godmother to the young lady and new bride who had just set off to begin her housekeeping in Australia. It is principally concerned with food; recipes, menus suitable for different sizes of parties and occasions, etc. 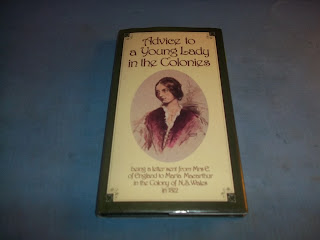 I have had this book forever. Someone gave it to me at some point years and years ago, and it looked interesting, but sat on my shelf. Every time I moved and went through my books, I would look at it and say 'oh yes, that, still looks interesting, still totally mean to look at it one day,' put it in a box, schlep it to the next place, put it on the shelf, and there it would sit till I moved again.

I think this is where having had to make the very hard choices on what to move 2300 miles came in handy- if I decided to take it, I sure as hell better finally crack the pages and do something with it.

Upon finally perusing its pages, I found the following recipe

Into a wide-mouthed glass jar put a quart of good brandy, a pound of powdered lump sugar and a quarter of a stick of vanilla. Stir these until the sugar is melted. Then put in one fine, smooth-rinded, unspotted orange, whole, without being cut in any way. Cover the jar close, and set it aside in a warm place. This liquer takes two or three months to make, so as to be well impregnated with the perfume of the orange."

"Yes, let's definitely do that thing" said we "sounds yummy'. However this proved somewhat easier said than done, since upon further reflection, this list of ingredients actually started to look pretty foreign.

For starters, we realized that what we thought of by 'powdered sugar' was probably not the same as what someone in New South Wales in 1812 would think of. Upon consultation with some educated folks, the general consensus was no, it isn't, and your best bet is probably to get some natural cone sugar from a Mexican market. 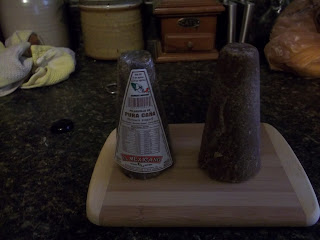 Unfortunately, this was not 'powdered'. No matter...... 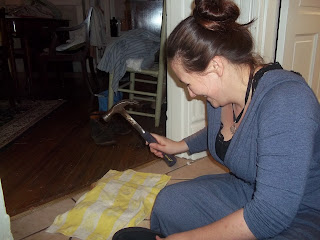 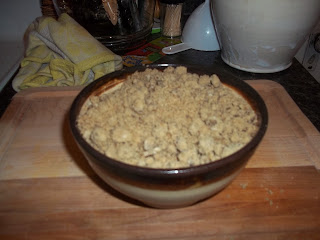 I powdered it myself.

I got it mostly powdered, with some small chunks left I was hoping would just dissolve. As it was, there is actually still quite a bit of sediment in the bottom which does not seem to have any intention of further dissolving. Brian assures it will be fine and we can strain it if we need to, but in future I'm not gonna stop hammering till it's smooth.

We also weren't entirely sure about what a 'stick' of vanilla would be. We are guessing this must be a bean. I mean, they're pretty stick-like. They are also, as it turns out, extremely expensive. Luckily the recipe doesn't call for much. I actually put in one half of the two beans you get in a jar for $8.50 at Kroger. 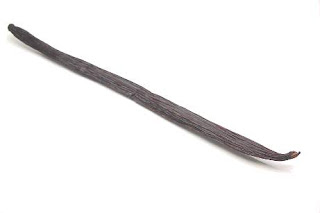 "I cost more than a latte."

This was another point of 'Are we being insane? well, yes, but let's just accept that and go with it."

In other words, yes, one could probably figure out a conversion to just use vanilla extract, but by then we were hell bent on actually recreating the original recipe. At this point we had spent at least two months talking about this and tracking down the ingredients. I believe the orange I finally put in there was the third one we had bought for the purpose, since the other two had gone bad waiting to be used.

Since it said 2-3 months we are hoping it will be ready to share at Jane Austen Festival in July.

This shit had better be fucking delicious......... 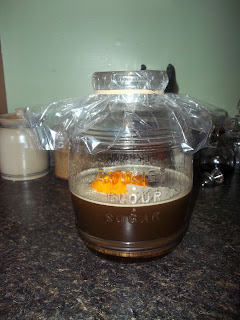 The orange 'impregnating' the brandy.....should I be blurring this?

Notes from the Victorian Man

Hey look, my honey started a new blog- ya'll should check it out and follow.

Posted by Amy Liebert at 8:49 PM No comments:


Finally, a mere 2+ months from beginning this thing, it is FINISHED. 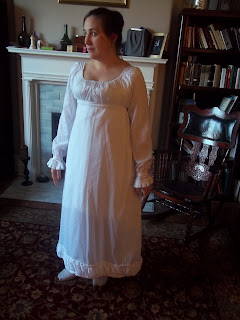 The bodice pattern was draped by the amazing and talented Maggie Waterman. 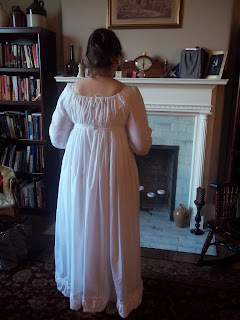 Posing for this shot involved my boyfriend saying the phrase 'yeah, I can back up and take it'......so yeah, that happened...... 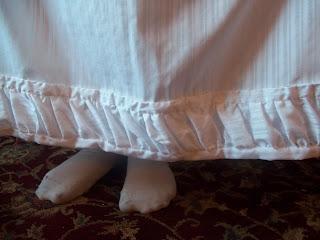 I made the bottom ruffle as a separate piece. It is attached it at the top of the ruffle, with the bottom roughly even with the hem of the dress, hanging over about 1/4". It was easier to leave the bottom unattached rather than try to get it all to lay down smooth, and it doesn't seem to be flopping or rising up about as I wear it (knock on wood). If it becomes an issue I'll just tack it down in a few places. 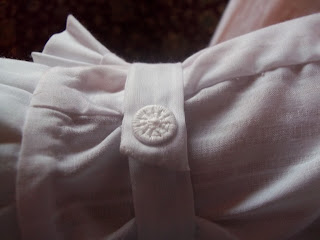 Dorset buttons from http://www.wmboothdraper.com/. Waiting for these to come in the mail was the final thing holding this up, even after I had worn the damn thing. Cannot tell you how good it felt to sew them on there and label this dress as DONE. 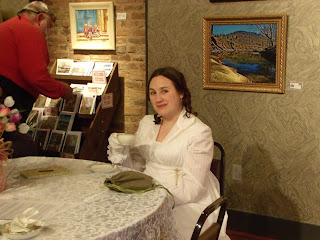 In action as Lizzy Bennet in Vevay, Indiana
Photo by Andrea Kappes


There was a fair amount of obsessing to get the right about of poof in the sleeves- from how long to make them, to how much I wanted the sleeves to come onto my hand, to how long the trim should be for that to happen, to moving the wristbands around once they were in and I had worn it once. I  must say, I am pretty damned please with myself on the results. 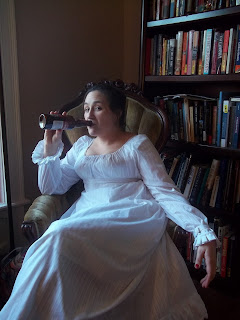