It's never too late to blog, right? (Right?!) I finally got around to making a decent Federal working outfit last fall to wear in the kitchen at Locust Grove. I did all of the stitching on the short gown and petticoat by hand. 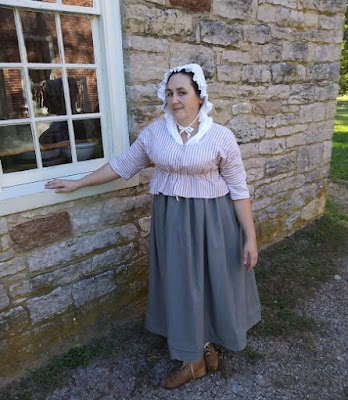 For the short gown, I used the Fig Leaf Patterns 219. This was another bit from my Jane Austen Festival haul last summer. 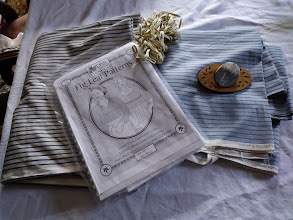 Like a lot of Mackenzie's patterns, this one actually comes with a couple of variations, both of which were part of the DAR Fashionable Tyrant exhibit. Since this outfit was designed for getting really dirty and sweaty in the kitchen, I went for the simpler, unlined option (the other one is a bit fancier and more substantial with a collar).

I did add about an inch to the bottom. The original from the DAR exhibit had a VERY short skirt, which I did not think would be flattering on me. However looking around it seems like these came in a variety of lengths. You can see one example from St. Louis by Anna Maria Von Phul here 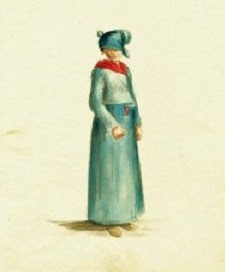 As well as this rather interesting Danish example here 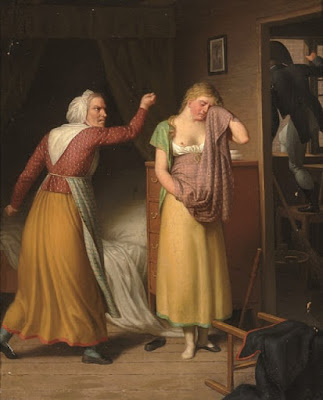 Brian had apparently been hauling this striped cotton around for years, just looking for its purpose. And this was it! 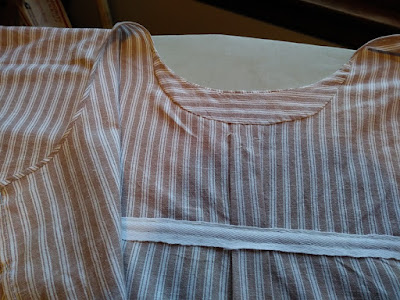 Brian sketched the line for the drawstring casing on me with a fabric marking pen. (The pattern does come with lines you can use if you don't want to DIY it).

I used 1 inch twill tape to create the casing on the inside.

The reinforcing piece on the neck will look strange when you cut it out, but when you go to put it together it actually will fit into place fine.

**I accidentally inverted the pleat here. It worked out fine, but don't work off this image for it.

For the petticoat, I relied on the research in  Past Patterns 037 High-Waisted Petticoat pattern.  This is based on an original from the period. As with all of Saundra Altman's patterns, this comes with a wonderful booklet full of her research and observations. I didn't actually need the pattern to cut it out, but just reading Sandra's research is VERY helpful. 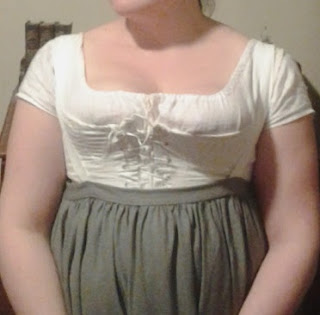 I made this out of some wool suiting from Fashion Fabrics Club. I chose wool because it is more flame retardant than cotton, and I am often wearing this near the fire in the kitchen at Locust Grove. The weave is open enough that it breathes pretty well in cool to moderately warm weather. We will see how it does in the summer, but then again past a certain point there's not a lot that can keep you perfectly comfortable next to a fire in a Kentucky July. 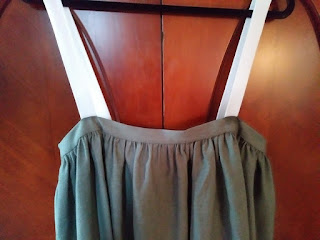 For petticoat straps, I used more 1 inch twill tape from William Booth, Draper. I have found the best thing is cut them pretty long, then pin them in place to try it on. From there, you want to readjust the front and back on each side of your body. Between shoulders and bust, most women have at least some asymmetry, and you want to be sure that these are fit well so that you can move with ease, but they wont' come off your shoulders. I frequently find that they end up at an angle in the front.


All topped off with a cap I designed myself, and a pair of boots from Taylor Rose Historical Outfitters. This has been a very comfortable outfit, which allows me to move and work with ease in the kitchen!
Posted by Amy Liebert at 9:08 PM No comments:

"A familiar sight at Lark Rise was that of a younger girl - any young girl between ten and thirteen- pushing one of the two perambulators in the hamlet round the Rise with a smallish-sized, oak clothes box with black handles lashed to the seat.....

She had been to the Rectory for THE BOX , which appeared almost simultaneously with every new baby, and a grueling time she would have had pushing her load the mile and a half, keeping it from slipping from its narrow perch. But, very soon, such small drawbacks would be forgotten in the pleasure of seeing it unpacked. It contained half a dozen of everything- tiny shirts, swathes, long flannel barrows, nighties and napkins, made, kept in repair, and lent for every confinement by the clergymen's daughter. In addition to the loaned clothes, it would contain, as a gift, packets of tea and sugar and a tin of patent groats for making gruel. "

The ritual which Flora Thompson describes in the 1880's was an old one, going back at least as far as the beginning of the nineteenth century. We can find evidence of it in several sewing manuals from the period. These manuals, geared towards middle and upper class women, provided advice on charitable sewing for the deserving poor in their neighborhoods.

The Ladies Economical Assistant, published in England in 1808 said that "There is not, perhaps, any act of charity more truly beneficial to the poor than the custom of lending a box of linen to lying-in women, for the month of f their confinement."  In 1838, The Workwoman's Guide continued the same tradition, stating that "Linen is often lent by ladies to the poor, at their confinements, in bags, boxes, or baskets ...." which is followed by a precise inventory of recommended items to include.

The author of this work gives more detail on the box itself, saying that "....the most convenient kind of basket for containing these articles of clothing, is a light wicker-work one, about 20 inches long, 12 inches wide, and 20 inches high...it should have two handles, sufficiently high to allow of the lid opening easily."

These boxes contained clothes for the new mothers as well. The suggested inventory from The Workwoman's Guide is specifically divided between items for mother and baby, even suggesting the addition of a few books for the mother to read during her confinement. It would be tempting to think that for these women, the period of confinement provided a rare opportunity for some rest; however Thompson remembers the mothers in her hamlet taking pride in returning to their household work as quickly as possible. In any case, the authors of these manuals attempted to think equally of the comfort and needs of these poor women and their infants. 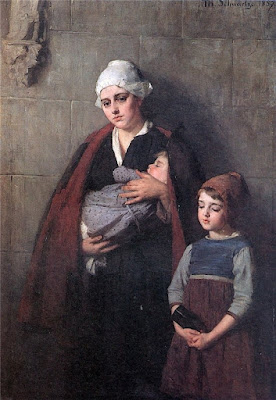 
The loaning of 'The Box' was supposed to be an orderly, well regulated affair, at least according to the manuals. The Ladies Economical Assistant has a great deal of advice on the handling of this loan, insisting that the box must be returned at the end of a month.  "I would strongly recommend' writes the author 'that no part of the contents of the box should be parted with on any account; otherwise, before the things are replaced they are probably wanted, and thus great disappointment is occasioned to whose who look upon this help as so material a comfort."For those women who required further assistance, she provides the following advice to her readers "receiving the box, with the contents well washed, and agreeing with the inventory (which should always be sent with the things,) a present of a few articles of an infant's dress may be given to deserving families, if an extension of the charity be thought proper."

Thompson tells us that these rules were understood in the Hamlet, at least in theory. "The boxes were supposed to be returned at the end of the month" says Thompson "with the clothes freshly laundered." But of course reality does not always correspond nicely with an advice manual, and extensions were regularly given when no one else in the hamlet had recently had a child. Thus 'THE BOX' might actually stay with a single family for six or seven weeks, allowing them to avoid ever having to lay out the time and money for clothes which their children would only wear at the very beginning of their lives. And the Rector's daughter did, in fact, also make several permanent presents of infants clothing upon the THE BOX's return. 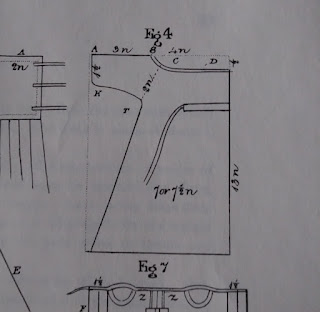 Outline for a gown for poor infants from the Workwoman's Guide

In the Lark Rise hamlet, this institution was so popular that the Rector's daughter actually had to maintain an auxiliary box for times when the first one was in use. She also maintained two christening gowns to be used when the time came.

The Rector's daughter, Miss Ellison, gives a picture of one of the women who was doing all this charitable sewing. Thompson says "Such a life as hers must have been is almost unimaginable now. Between playing the harmonium in church, teaching in Sunday school, ordering her father's meals and overseeing the maids, she must have spent hours doing needlework." And of course 'The Box' was not the only bit of charitable sewing she was doing 'Course, unattractive needlework, too, cross-over shawls and flannel petticoats for the old women, flannel shirts and long, thick knitted stockings for the old men, these, as well as the babies print frocks, were all made by her own hands."


Sadly, for all of her trouble, Miss Ellison was not well loved or the recipient of much gratitude in the hamlet. "She got little credit for this." Says Thompson "The mothers, like the children, looked upon the small garments, both loaned and given, as a provision of nature. Indeed, they were rather inclined to criticize."

So far Lark Rise is the latest evidence I have seen of this tradition.  Thompson writes about her 1880's childhood as a time when a great deal of change was still coming to her hamlet, where she and her siblings were the last generation to experience many decades, or even centuries, old rhythms of life growing up. This was a tradition which made sense before inexpensive, ready-made clothing was widely available for infants. When the amount of time and effort it would take to make and maintain such clothing was much better done once by one wealthier person with leisure time, than repeated by a whole village of mothers who had little in the way of either time or money for materials.

However I would be very interested to see if and how long this tradition may have continued in other places. If you have seen any other examples of 'The Box' please let me know in the comments below! Many thanks to my friend Eleanor Rust for bringing Lark Rise to Candleford to my attention!