For those of you who are not familiar, the Workwoman's Guide was first published in England in 1838 by 'A Lady'. Geared towards Middle Class and wealthy women, the Guide includes sewing and cutting instructions for many different garments, including those which might be worn within their own home. It also lays out clear instructions for making clothes for the poor to wear.

I have long been wanting to get my hands dirty, so to speak, and recreate some of these garments. I finally found my excuse as the time rolls around once again for the Great Dickens Christmas Fair in San Francisco. Dickens is a wonderful Victorian Christmas extravaganza, where visitors will meet characters from Charles Dickens novels as well as historical characters such as Queen Victoria and Dickens himself. 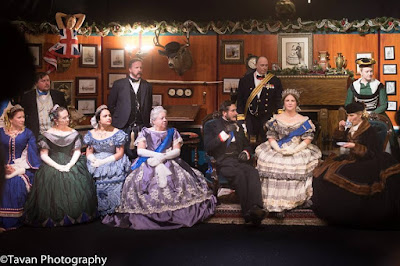 Queen Victoria and her ladies

These include ladies of quality, as well as many of what the Victorians called the 'deserving' (and 'undeserving') poor.  The perfect people to be creating and receiving some of these garments! And since I cannot attend myself this year,  I decided to put some projects together to send out to some of my friends there to work on in character.

The Guide is organized by chapter with accompanying image plates. Each chapter is broken up by garment type, and then into variations on that type. These are clearly delineated based on whether they are for wealthy or the poor. There is a whole section in Chapter three on making caps for infants and young children, which including several variations based on age of the child and income level.
For my first project, I chose to make caps for poor infants, from Plate 2 Fig 12 & 13. The description is as follows

"This is much used by the poor, and is easily made and as easily washed. Take of the material a piece 6 nails down the selvage, and 3 1/2 nails wide. Double it, letting D be the double part. Sew up the back from A to C, leaving a hole or button-hole at the top, C; make a runner all round the front and behind, at half a nail's distance from edge, which is hemmed with a very narrow hem to form a frill: also, lay in a runner from E to F: next, sew a bobbin at B, letting one end of the string hang outside, and the other, being pulled through the seam, remains inside the cap. The end is carried up and brought out through the hole at C.....when worn the tapes, at being tied together at B, draw the cap up into shape, and if neatly arranged and pulled out with the fingers, it looks very neat and pretty....some put a loop of bobbin inside at B, which, on being brought out through C, fastens to a button at B, on the outside." 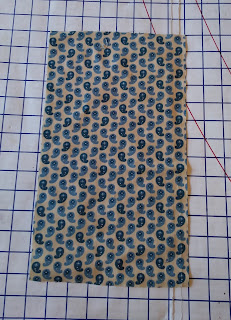 The illustrations on the accompanying plate look as follows 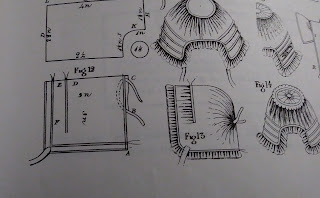 There were a few things that confused me with these instructions. First of all, how to make the runner? Also, the illustration clearly has a strap (which, interestingly, is placed differently in Figure 13 than it is in Figure 12), yet the instructions include no mention of such a strap.

I made a couple of prototypes just folding the fabric and stitching in a channel, but I wasn't satisfied with the shape it gave.

But then I looked back at some of the earlier sections in the chapter. An earlier set of instructions for

"Two runners, or string cases.... are then made by hemming neatly two bits of soft tape or sarsenet inside....."

Here then was the solution! It appears that this Lady did not feel the need to repeat anything which would work generally for all variations within the same garment group. Having already defined how to make a runner for a cap once, why take up more space doing so again? 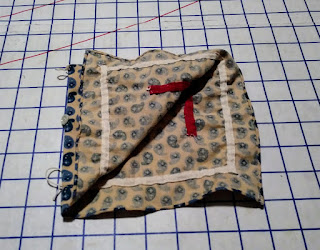 I used tape for the runners on my next attempt and was quite pleased with the results. 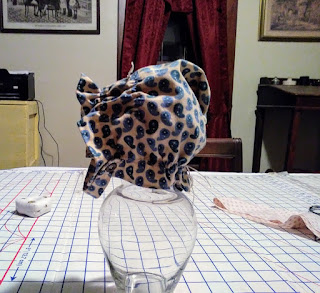 Next was the chin-strap issue. Another cap variation , for a "Foundling Cap", contained the following instructions

"A chin-stay is three nails long, ** and half a nail wide.....The chin-stay should be neatly sewn up the whole length, with a small button-hole at one end; they are generally sewn on at the left corner of the cap, and the button on the right."

"Some persons prefer having two buttons sewn on the cap, one at each ear, and the stay made with two button-holes, so as to be easily changed and washed, without changing the cap also, as babies are apt to wet them, which makes them hard and rough to the chin."

I have got enough experience with infants to see the wisdom in this. And anyway, when it comes to Victorian baby clothes, the more button-holes and buttons the more fun! So on this cap I added the double button holes. 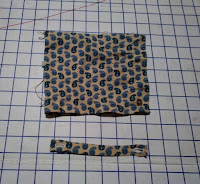 Getting good shots of this without an actual Victorian infant to put it on was somewhat challenging. 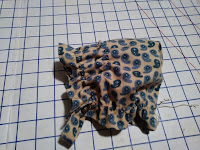 I'm quite pleased with this cap. However I will say that as cute as I think it is, the runner does not create nearly the amount of ruffle shown in the illustration in the plate. Having gone through several variations on how to do this, I feel confident saying that it's just going to- which is fine. I just need to keep in mind for future projects that the plate is a rough guide, may romanticize the finished product a bit.


So, big takeaways from my first foray into the Workwoman's Guide


I will be packing several finished caps up this week along with cut out pieces to work on new ones. I hope to make some more garments to send out as well before the run is over. Hopefully we will see some pictures of them in action soon!

Posted by Amy Liebert at 9:12 PM No comments: