Look What I Did!


Ok, so the doublet is now 99% finished! Which makes the whole outfit like 99.99% finished....and it only took me two years! All that is left to do is sew loops onto the sleeves to hook over the buttons. Also, I think after this weekend I will re-sew the snap tape (yes, snap tape, whaddya got to say about it?!) holding the front together, because it is showing just that teeny tiny bit that will drive me mad. HOWEVER, mostly, it is DONE. Here are some badly lit apartment shots, to be replaced by better in action shots over the weekend. 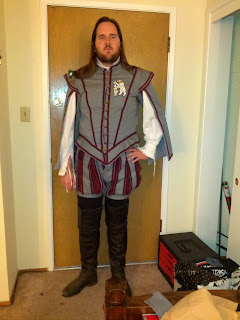 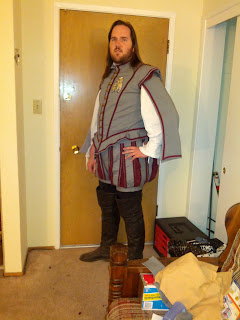 This was the first set of boys clothes I had ever made. Having gone through it, I don't feel like it was too difficult. Of course when I look at the whole thing, I now see a million things I would now change, since I know better. However putting the crazy inner critic aside, I daresay he looks like a finely outfitted fellow, and I am rather damned proud of myself :-)

Yesterday, in the wee hours of the morning, I lost my friend Surrey Blackburn. She had been battling cancer on and off for many, many years, and this go-round proved her last.

Surrey was an incredible force of nature and light for so many people. She was kind, polite and incredibly caring. If she was talking to you, you felt like the most important person in the room. She was also incredibly strong and determined. It was not wise to stand in Surrey's way. 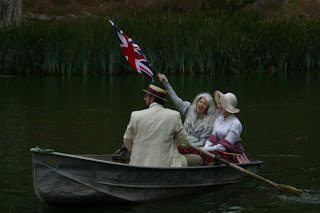 
I have so many incredible memories of Surrey. When I first came into Other Books, she made me feel welcome and appreciated. Just having her know who I was felt huge. There were the incredible Victorian picnics where she would organize egg races and badminton. 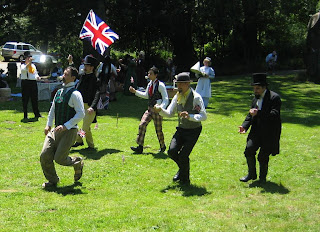 Surrey made them do this.
That's her in the back with the megaphone dressed
as a WWI nurse- CAN YOU GET MORE FRIGGIN' AWESOME THAN THAT??!?


There was our awesome travels together in England, where she showed me Bristol, the city she grew up in. When she was a little girl, Surrey survived the bombing in that city during WWII. She was able to die peacefully in bed decades later after a long and very full life. Her own personal 'screw you' to the Nazis.

She also took me on a walking tour of London. We visited the Globe, the Tower and other big spots, but also wandered around finding amazing little things you've never heard of, like a prostitute's graveyard and a community garden started in a poor and industrial neighborhood by social reformers in the 19th century. We saw the last walls of the Marshalsea prison, and then she moved heaven and hell to be sure we would get to Gads Hill and see Dickens' house. 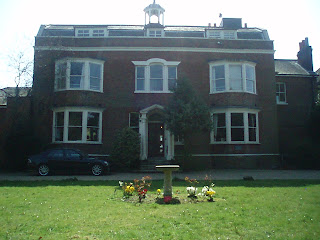 Gad's Hill
There's a whole saga about getting here that involves us almost
dying in a road rage incident on the M5. It was totally awesome.


Yesterday I went to a gathering of family and friends at her daughter's house. It seemed like so many Surrey and Gregor parties, I kept waiting for her to walk through the door. It seemed, and still does, almost inconceivable to me that she is gone.

Yesterday was full of the initial shock of death. Making phone calls to friends, driving to see folks. Just trying to be in the company of others whom she had touched. For most of the day, despite my intermittent tears, I tried to be positive. I know that she did not suffer, and that she is not suffering now. I fully trust that an amazing spirit such as hers is now off on yet another incredible journey and adventure. I know that I am lucky that she touched my life along with so many others.

By the time I got home I just lost it and bawled myself to sleep. Screw being positive. I want my friend back.

Ok, I will do a bigger post soon with the insane run down on my summer reading plan for my upcoming MA exams. However in the meantime I am starting the summer off with a book not on those lists at all, written and given to me by one of my favorite professors at SF State, Sarah Curtis. 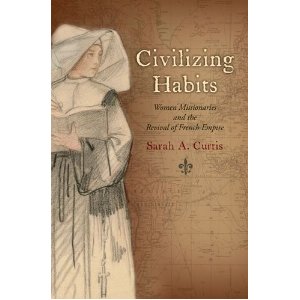 This book explores the careers of three French Missionary nuns in the first half of the 19th century. It explores the ways that these women were able to use their traditional roles in a heavily patriarchal organization, ie the Catholic Church, to go places and do things that lay women, especially unmarried women, could never do.
(Think of protestant Jane Eyre- "you have to marry me and go risk your life in India" "Hmm....couldn't I just do *one* of those things???" "NO- do what I say!")

It's also about the shift in convent focus and life after religious orders were re-authorized under Napoleon. Basically the old, contemplative model gave way to a new generation of nuns who wanted to get out and be useful- and in this case acts as agents of imperialism.

Posted by Amy Liebert at 4:16 PM No comments:

Email ThisBlogThis!Share to TwitterShare to FacebookShare to Pinterest
Labels: Books

The End is Just the Beginning

By Wednesday noonish must

1) finish term paper-needs revision and another 5-10 pages. Since I wrote the original 15 page draft in a day, less than concerned.

4) Continue hounding 2 professors from MA Exam committee to give me at least a partial reading list before leaving for summer.

Then there will be a brief intermission for the rest of Wednesday while I exercise my post-finals right to get good and tanked.

Frankly, all of this just seems like annoying bunch of crap to get through  before the REAL projects begin....i.e, Tahoe prep and insane summer long study session for MA exam in the fall. More on that soon..............
Posted by Amy Liebert at 5:01 PM No comments: