What I'm Eating- Beans and Veggies

Ok, this one isn't exactly complicated, but it would certainly have been outside the scope of my culinary imagination not too long ago, so I'm proud of it. 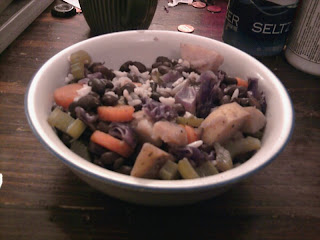 My original plan was just to cook up some rice and that bag of beans that's been sitting around forever- one of those, hmm....what's left in the cupboards I hadn't previously seriously considered eating but now we're down to it so let'ts give it another look type deals- but then I got super fancy and threw in some carrots, potatoes and celery the last 20 minutes I was cooking the beans.(I had also added onions at the beginning.) Also plenty of salt, pepper, and oregano. Served over rice, and Voy-la.

Email ThisBlogThis!Share to TwitterShare to FacebookShare to Pinterest
Labels: Cooking