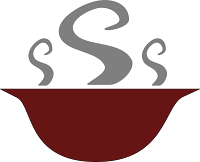 So since I met the Fella, I have been introduced to the magic of lentils. Delicious, nutritious, and no pre-soaking or any of that malarchy involved! Tonight was my first actual experience cooking with them, and it seems to be a resounding success! I made up the following after looking at a few different recipes and based on what we actually had in the house.

All the recipes I found online called for using vegetable stock, which I did not do because a) it is chock FULL of sodium and goodness knows what else and b) there is no reason for it! If you have a nice base of olive oil and onions plus other delicious ingredients, in this case including the juices from a can of stewed tomatoes, you will get plenty of flavor. There is no reason to go with prepackaged sodium filled garbage!

Heat olive oil in the bottom of your pot on medium and chop the veggies. Add garlic and kosher salt once the oil is warm, followed by the chopped veggies and other seasonings (except the vinegar). Most recipes tell you to saute onions before other veggies, but I've started putting them in with the carrots and celery because those things take a little while to cook, and I don't like to destroy my onions.

Saute until veggies are tender. In the meantime make sure you don't like, need to chop the tomatoes. Because apparently those can still be in pretty big chunks, and you wouldn't want to have to like...fish them out of your soup once you dump the can in to chop...yeah...anyway...

Once veggies are getting tender, add water, lentils, and tomatoes. Make sure you don't drain the tomatoes or lose any of their juicy goodness, you want that for your broth.  Raise to a boil, then simmer till lentils are tender, about 20-30 minutes.

Once it seems ready, take a final taste test. Add any salt, pepper, etc. Then and only then add in the vinegar.

Serve with fresh baked bread, if your honey is awesome and makes you fresh bread :-)