From my reprint of the 1804 edition of Hannah Glass

Take a quart of green peas, put to them a quart of water, a bundle of dried mint, and a little salt. Let them boil till the peas are quite tender; then put in some beaten pepper, a piece of butter as big as a walnut rolled in flour, stir it all together and let it boil a few minutes; Then add two quarts of milk, let it boil a quarter of an hour, take out the mint, and serve it up.

I chose this for a demo recipe at Locust Grove today, mostly because I was just tickled to actually be making peas porridge, and the ingredients were cheap. However beyond being amusing, it also turned out to be delicious!

I used a package of dried green split peas and fresh mint from the herb garden at Locust Grove, since I didn't have any dried (it gave a great flavor!). I may have put in too much water since it still wasn't very thick by step two, so I didn't end up adding a lot of milk. Not really sure how to translate a 'walnut rolled in flour' (is this before or after shelling? How robust is this walnut?), so I just went with a very large dollop.

Not sure how I'd feel about it after 9 days, but it has continued to thicken up nicely as it sits. It also reheated very well in the microwave for dinner. Safe to say this is making it into my regular reenactment rotation! 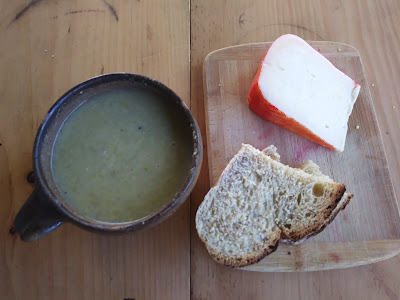 Makes an especially great meal with bread, cheese, and wine (wine not pictured, probably because I was drinking it).